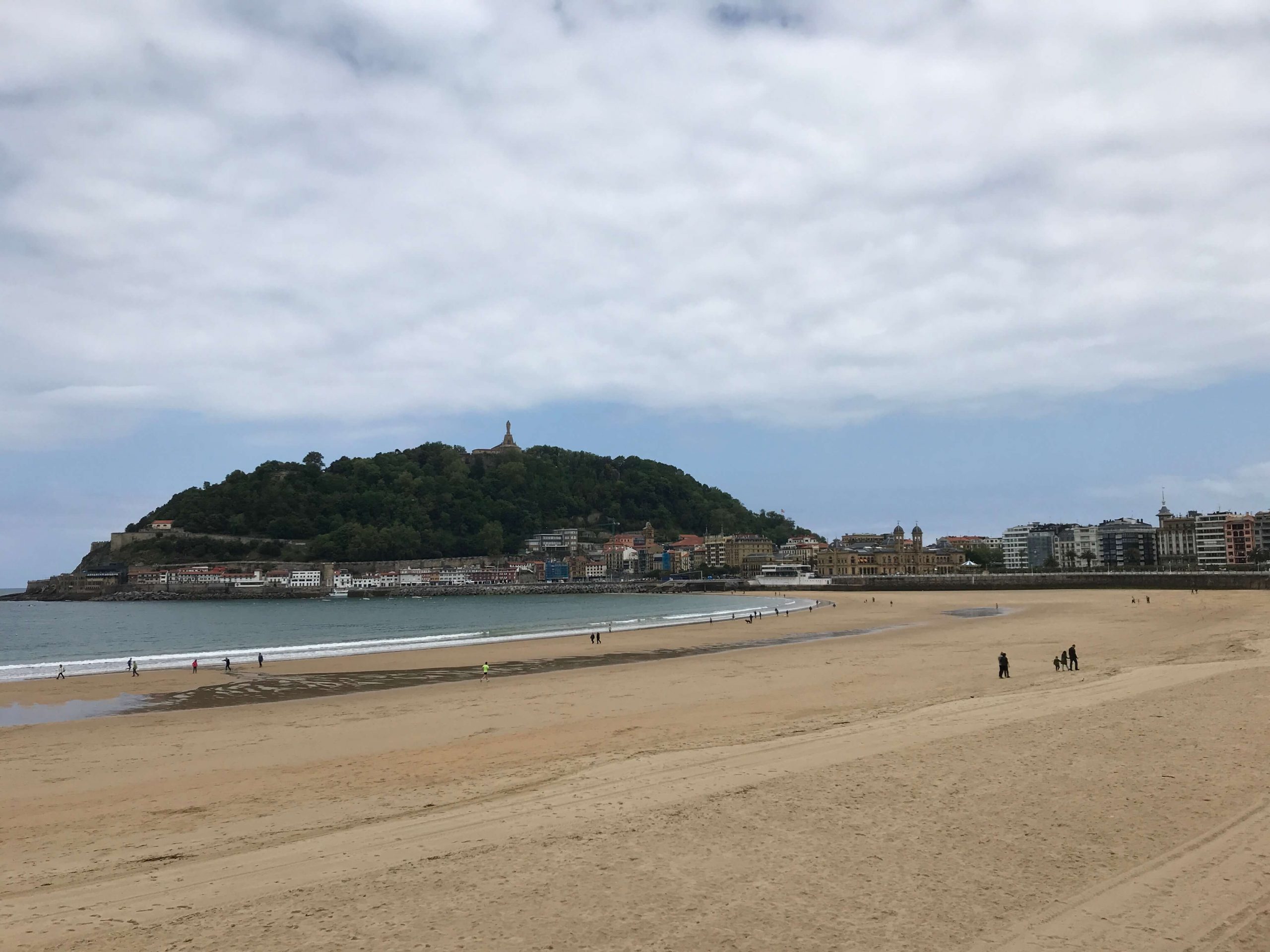 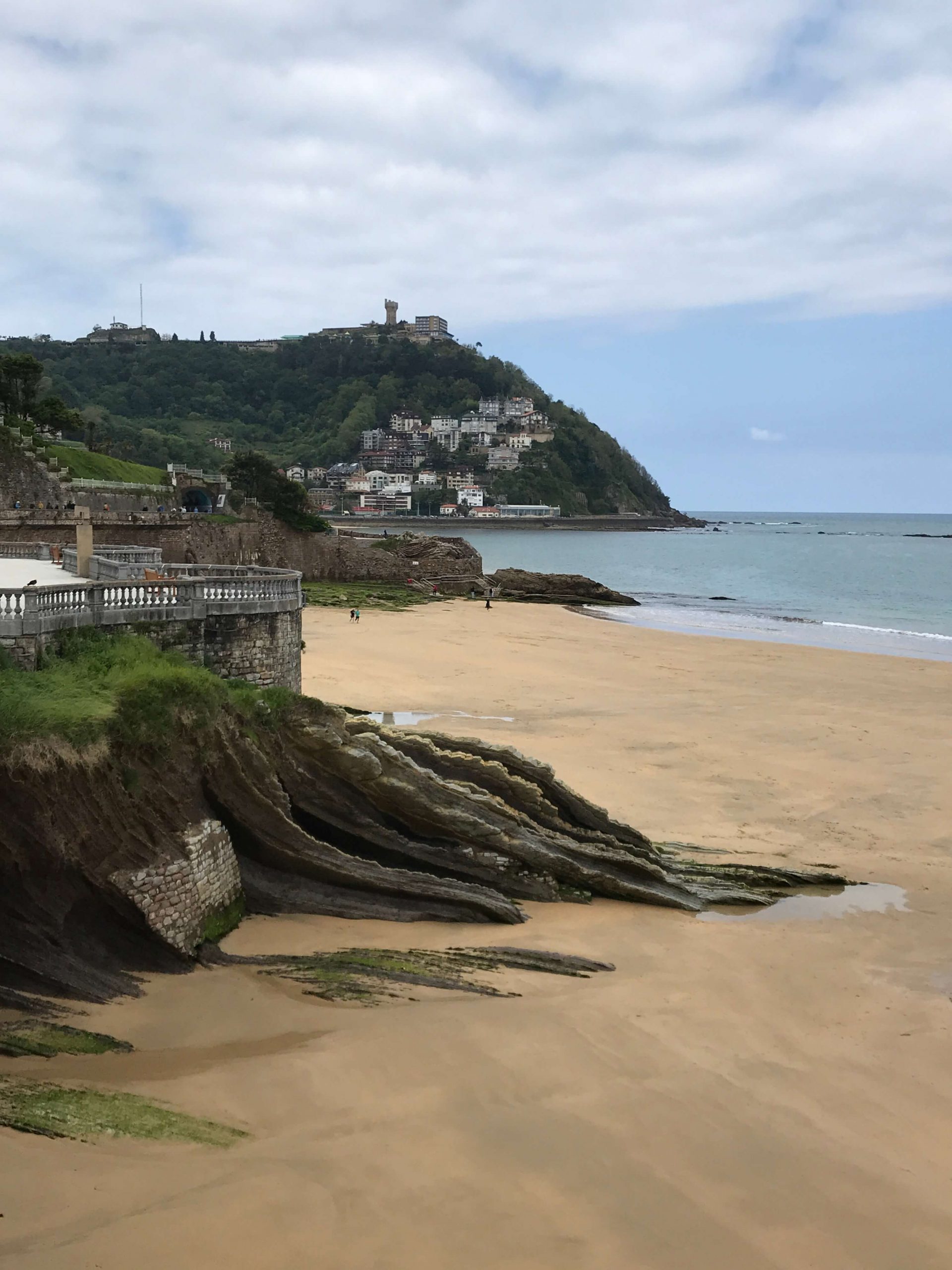 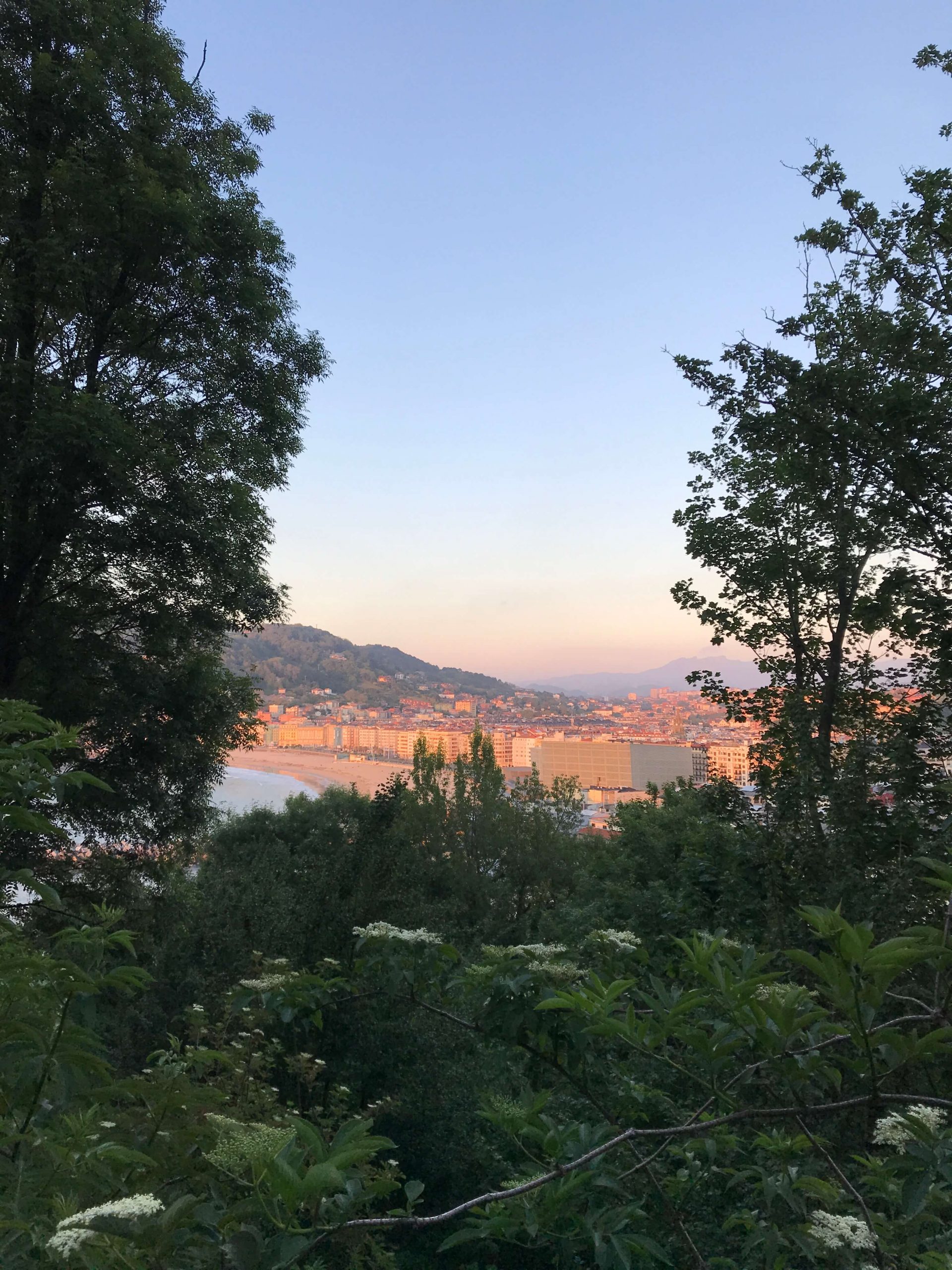 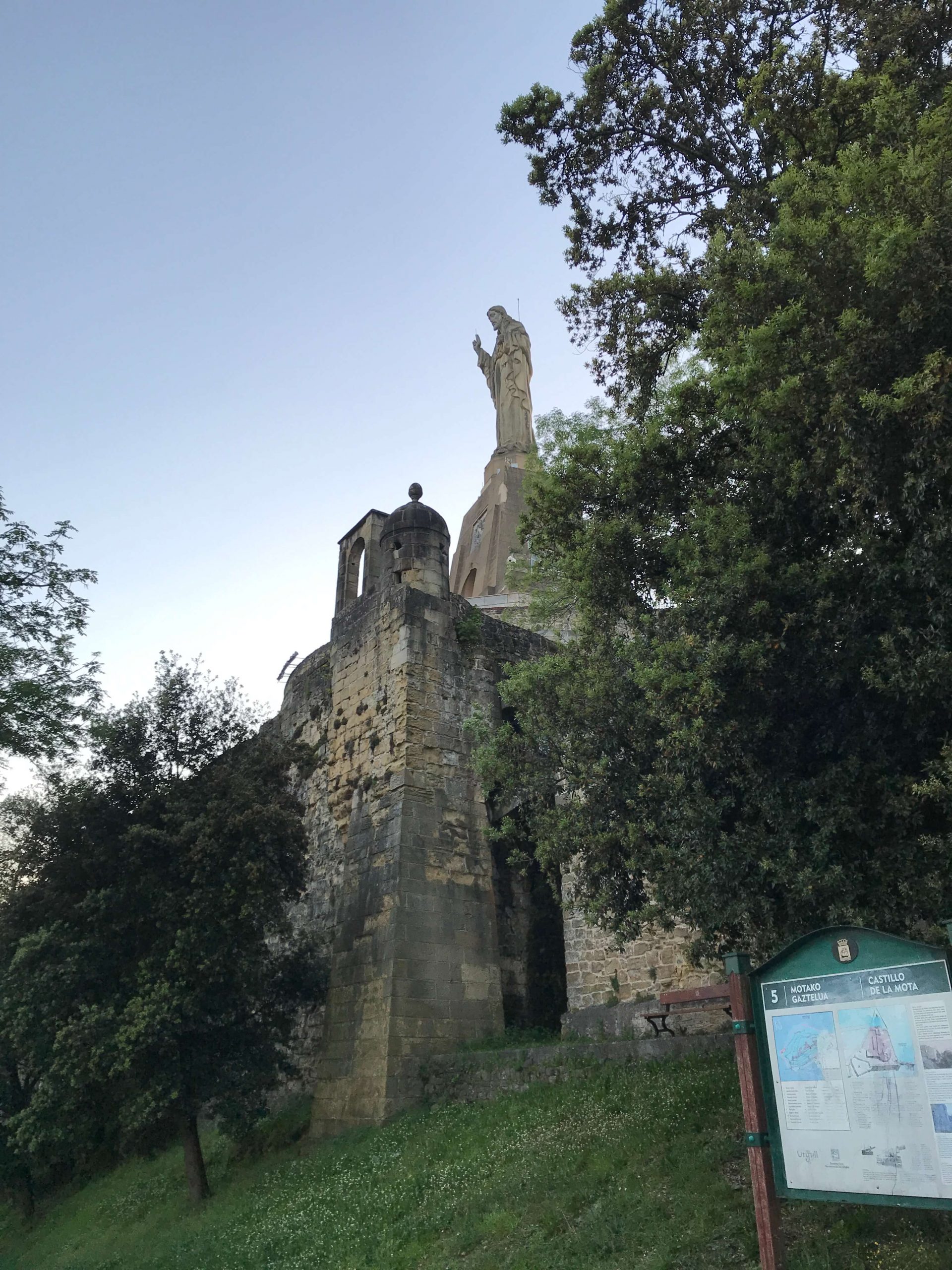 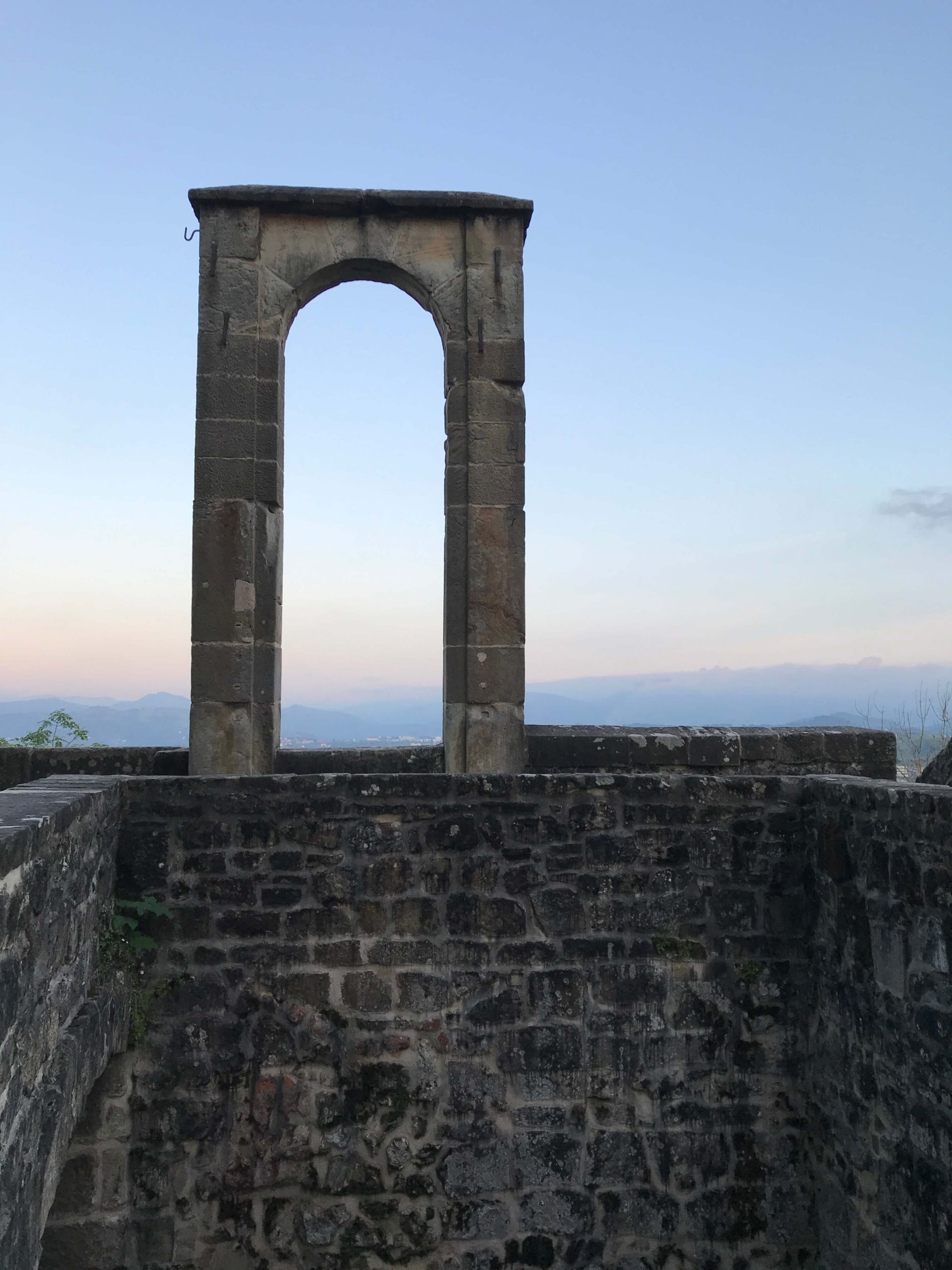 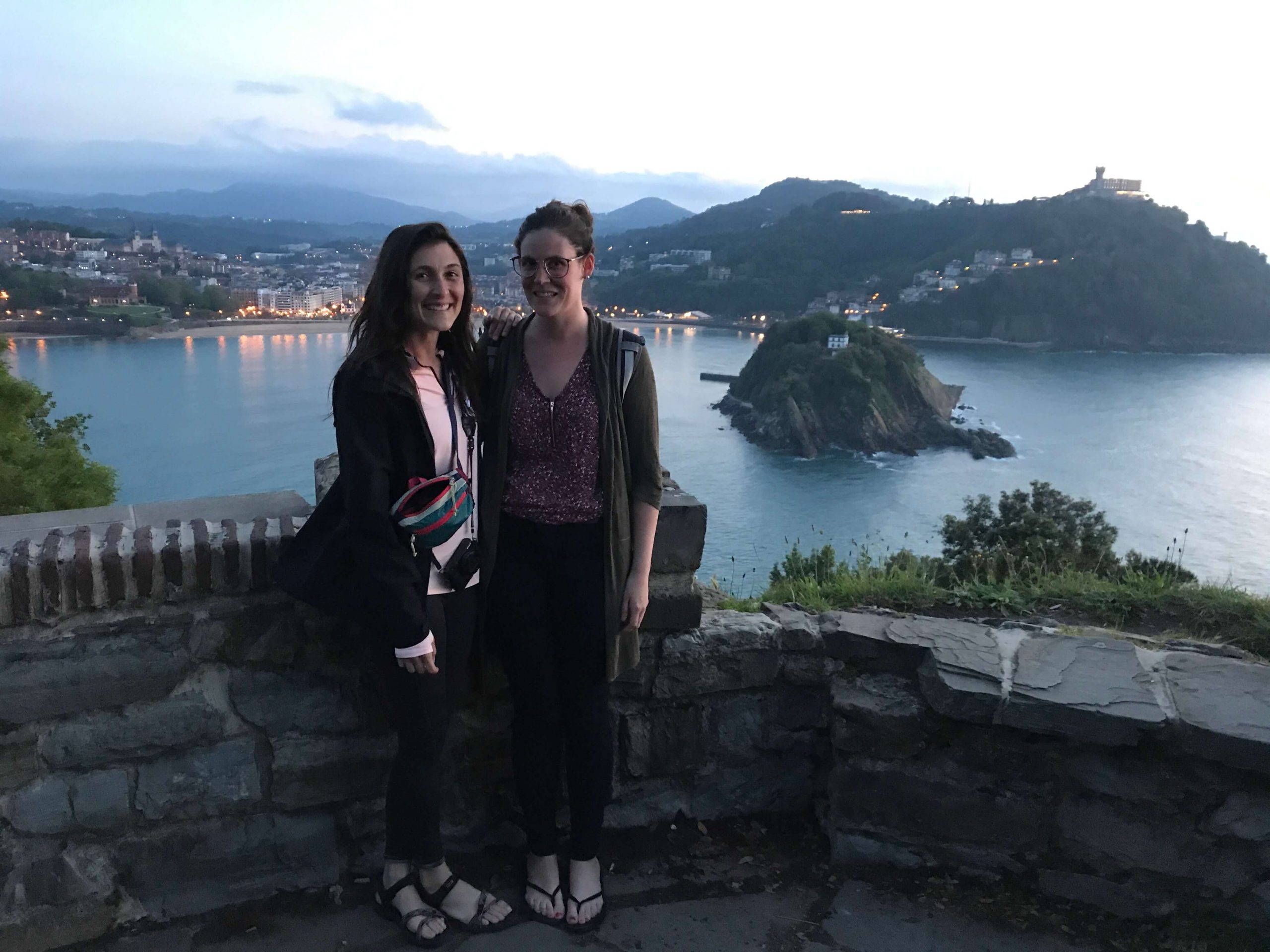 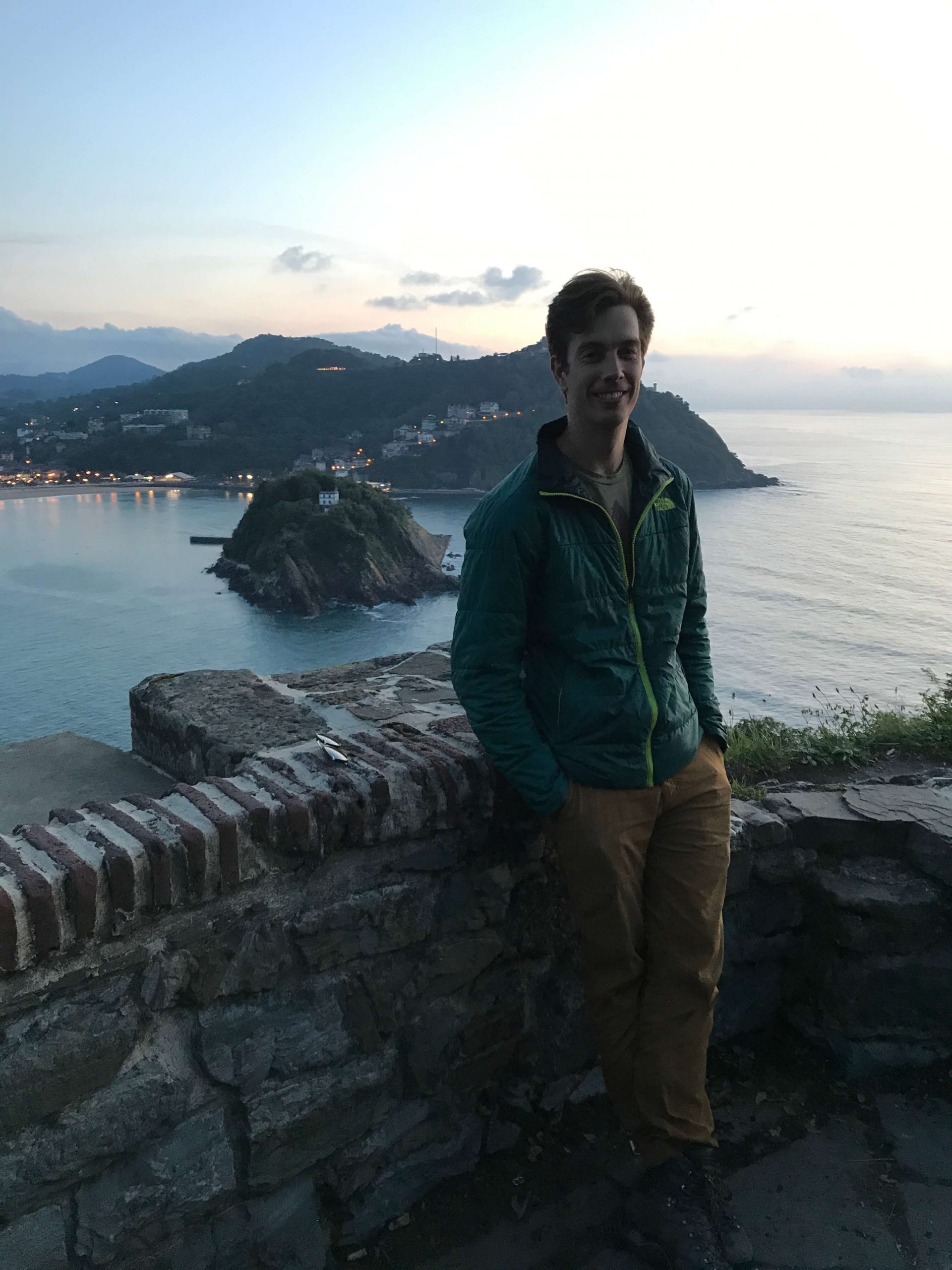 This story is continued from Day 4: Pasaia to San Sebastian.

Nothing was open within proximity so I wandered a couple of blocks further than the cafe where I was writing to find a craft beer shop called KAÑABIKAÑA. The yellow, black, and white walls received light in all the right ways and the large windows faced the stormy sea. The taps behind the bar were designed to accommodate water bottles rather than beer glasses, resulting in the perfect pour every time—not a single drop wasted. I admired the dozens of craft bottles lining the walls and the beers available to taste. My favorites ended up being the two stouts and my palette was excited to be drinking something other than Estrella.

The owner was tending to the bar alone. He was engaged with locals who clearly frequent this space, but soon we were left on our own. Still craving human connection and following my genuine curiosity, I asked him about his ventures into the craft beer world. He explained how the design of the shop was inspired by Russia, where he met his wife, and his time living abroad in Moscow. He spoke of their son and what it means to be a father while owning a unique business not yet taking off in the region of Spain. Our conversations quickly evolved beyond beer and soon we forgot we were even speaking about beer at all.

I’m always grateful for how quickly people are willing to descend to the depths of their identities, histories, ideologies, and hearts. He let me ask about his family, his life, the growth he’s seen, and his hopes for the world. We expressed our equal appreciation for how quickly the conversation evolved between us and the importance of being open to others in our travels, our endeavors, and our lives. We were talking about pleasantries and shallow conversation when he said the most pivotal thing:

If you only talk about the weather, you’re either avoiding something or you’re empty inside.

The only word out of my mouth was, “Fuck.”

Without knowing the frustrations I had been carrying, his words touched on every experience spanning the last few days. There was no way of knowing this was a hard truth and exactly what I needed to hear, but as soon as I did, it seemed my mindset changed entirely. The moment I accepted I was using the weather to avoid what I was feeling and addressing the fear I had been harboring, the skies literally opened up to reveal the horizon line above the sea.

My phone died just minutes before the sun made its first appearance in three days. The hues from it’s changing position in the sky were amplified by the salty moisture in the air. The oranges, reds, and yellows were so vivid, I forgot greys even existed in the spectrum of the week’s experiences. We grabbed our beers and allowed ourselves to enjoy the sunset in silence. I imagine it will remain to be the most beautiful sunset of the Camino.

It was at a hostel in Annecy, France when I learned about San Sebastián (Donostia). One of the volunteer workers, who happened to share my last name Rutledge, had spent a short while doing Workaway in Spain. He said it was his favorite city and one he would return to in a heartbeat if the opportunity should allow.

Which is why I didn’t mind extending my stay. I was looking at options to divert to the Frances should the weather continue to be relentless and I was taking the opportunity to catch up on work for Pilgrim. Lingering would be a rare occurrence being in motion for the next 30 some odd days, so I accepted the weather as a welcomed hindrance. I was also sharing the dorm with a beautiful Canadian woman name Momo. After a quick conversation where I felt immediately connected to her energy, I asked if she would like to meet for breakfast that morning. We found a beautifully lit cafe (Sakona Coffee Roasters) with the kind of espresso that reminded me of home. We settled in and found there was so much more to our connection than the surface revealed.

There was finally a break in the clouds which gave way to constant sunshine. The wind still whipped past my ears, but we decided to walk along the raised boardwalk of Playa la Concha.  Staring out at the water, now cerulean blue from the sunshine, I could see why surfing was such a treasured activity. There was innate bliss drinking in the warmth of the afternoon. The entire city sprang to life because of it.

When we reached the peninsula, we decided to turn and walk back. Something caught my ears before my eyes could catch up, but if there’s one thing I love to do, it’s to follow the sound of music until I happen upon the source. A trio of men were sitting on a metal bench. One played the accordion, another the electric guitar, and the third was plucking a cello. Their music was the embodiment of sunshine and my body relinquished control to the joy being expressed through their playing. The crowds gathered and no face passed without shaping into a smile. We were witnessing their majesty, but we were equal parts of it. I recorded a short video before leaving so I could play their music on my hardest days.

A short while later, I get a message on Instagram from my friend Alyssa back home. She tells me one of her clients posted an identical video of the man on the accordion a mere hour or so apart. She even did a double-take to make sure they were, in fact, separate videos from two people she knew who happened to be occupying the same city. I reached out to Emily immediately, trusting the fortuitous alignment of it all. Little did I know later that same year in November, she would be one of the first people to purchase my very first collection of poetry.

Everything else that day was an extension of the beautiful alignment of what had been leading me to this moment. There was the traveller, named Joel, who lived in Colorado half the year but is originally from Romania and was trekking through Europe before returning to his winter seasonal work. He joined me and Momo on a stroll to Castillo de La Mota atop Monte Urgull. We wandered the trails shaded by trees, losing daylight as we climbed higher. When we finally reached the top, we were rewarded with sweeping views of the bay of San Sebastián as well as the wonderful sounds of locals gathered for sunset singing songs to the accompaniment of an acoustic guitar and some metal shakers.

We got locked in the castle gates after sunset and would have been stuck, except for a man with a bike who knew about a hole in the gate near the aquarium that we could climb through. We laughed as we walked along the embarcadero and towards our hostel within the sprawl of the city. We happened upon a bustling tapas bar, ducking in for late bites and continued good conversation. I was so grateful to be in the company of such beautiful souls. Being here in this moment with people I wouldn’t have met if I continued walking made me hope for more stillness on the Camino.

I think this is when I gave myself permission to stay somewhere an extra day should the energy feel right and to not be afraid of reaching out to people other than Pilgrims along the journey. I knew the distance ahead would require the work, but there was more than one way to walk a Camino.

I was quickly learning this was very much mine.