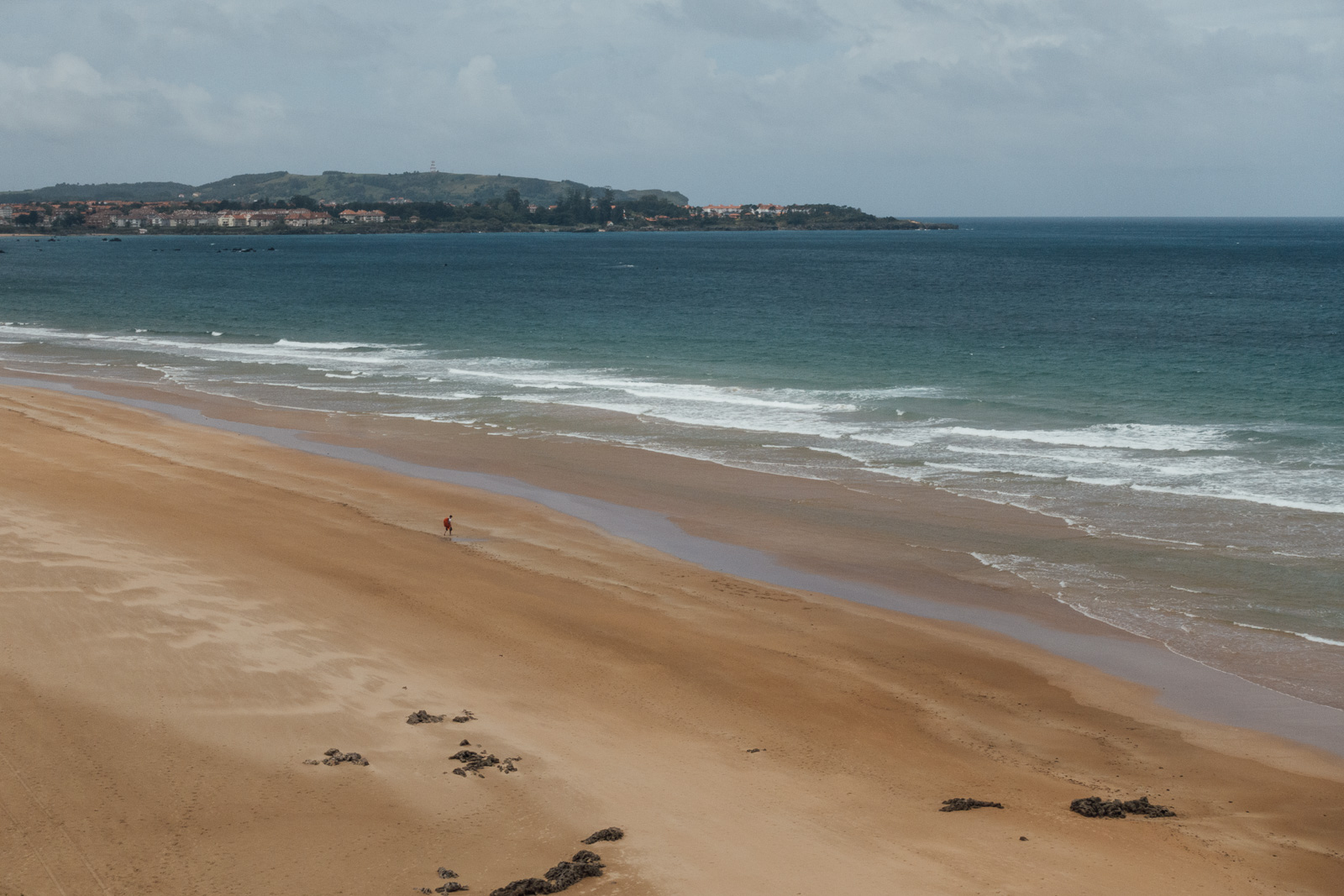 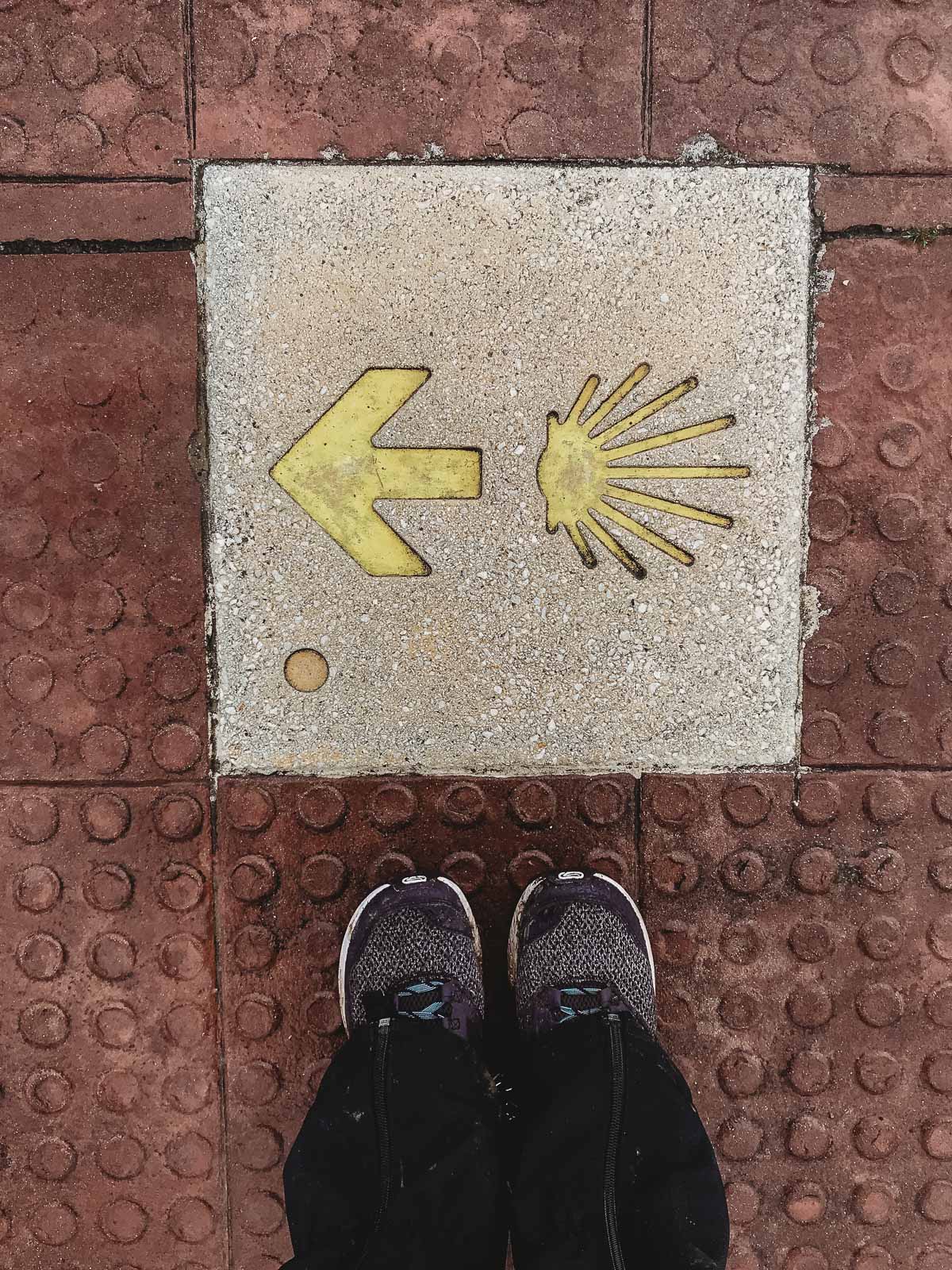 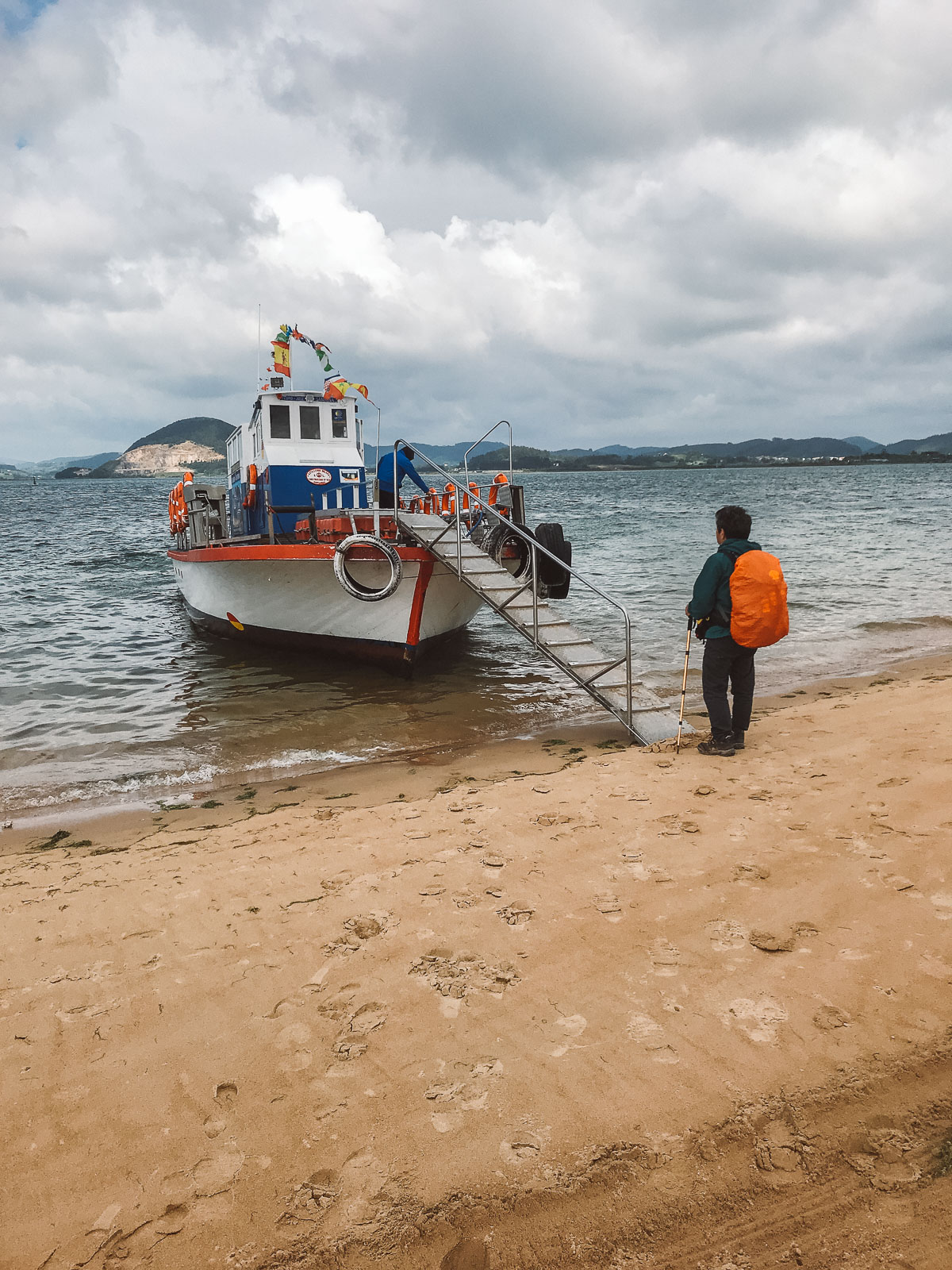 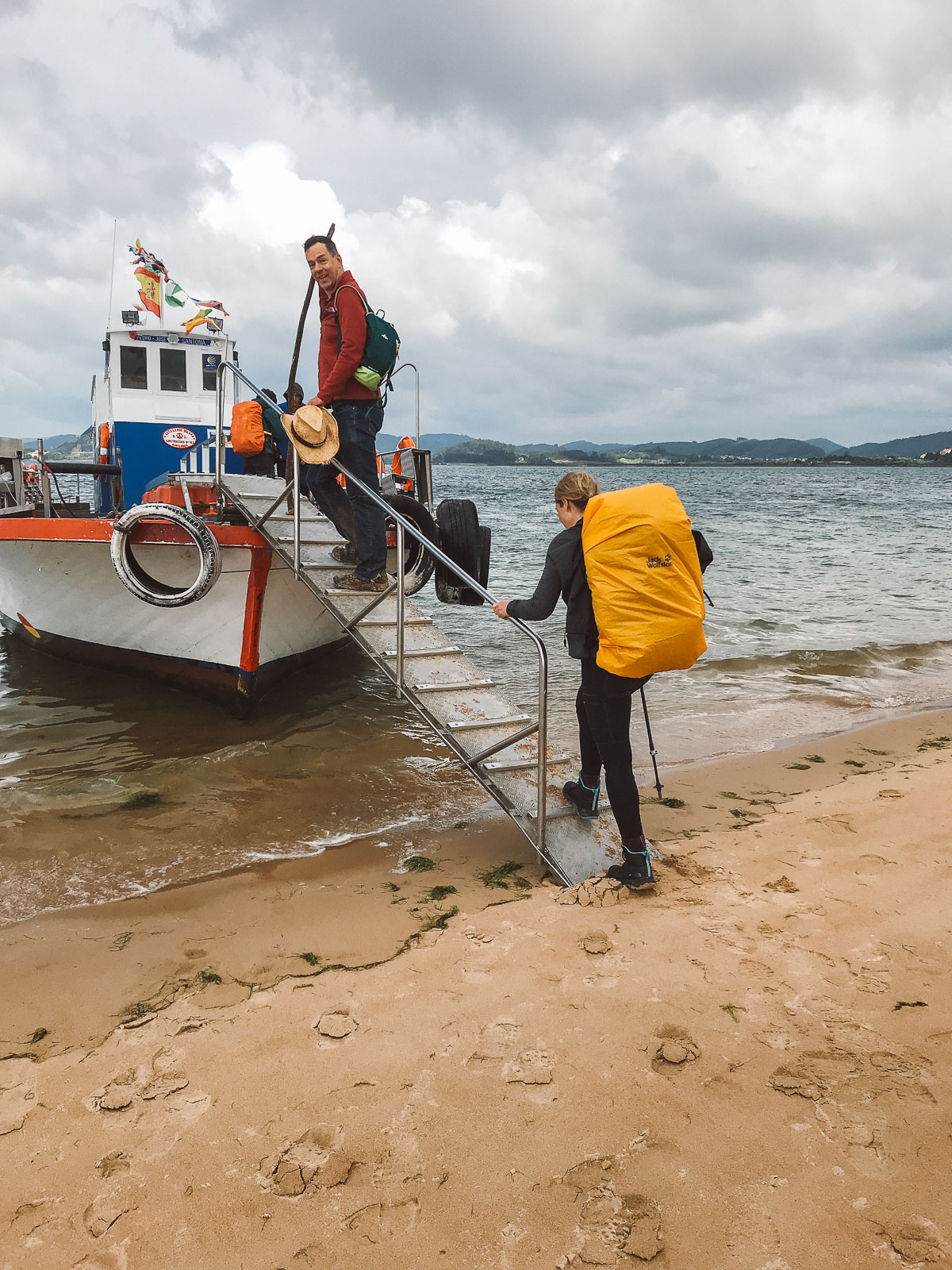 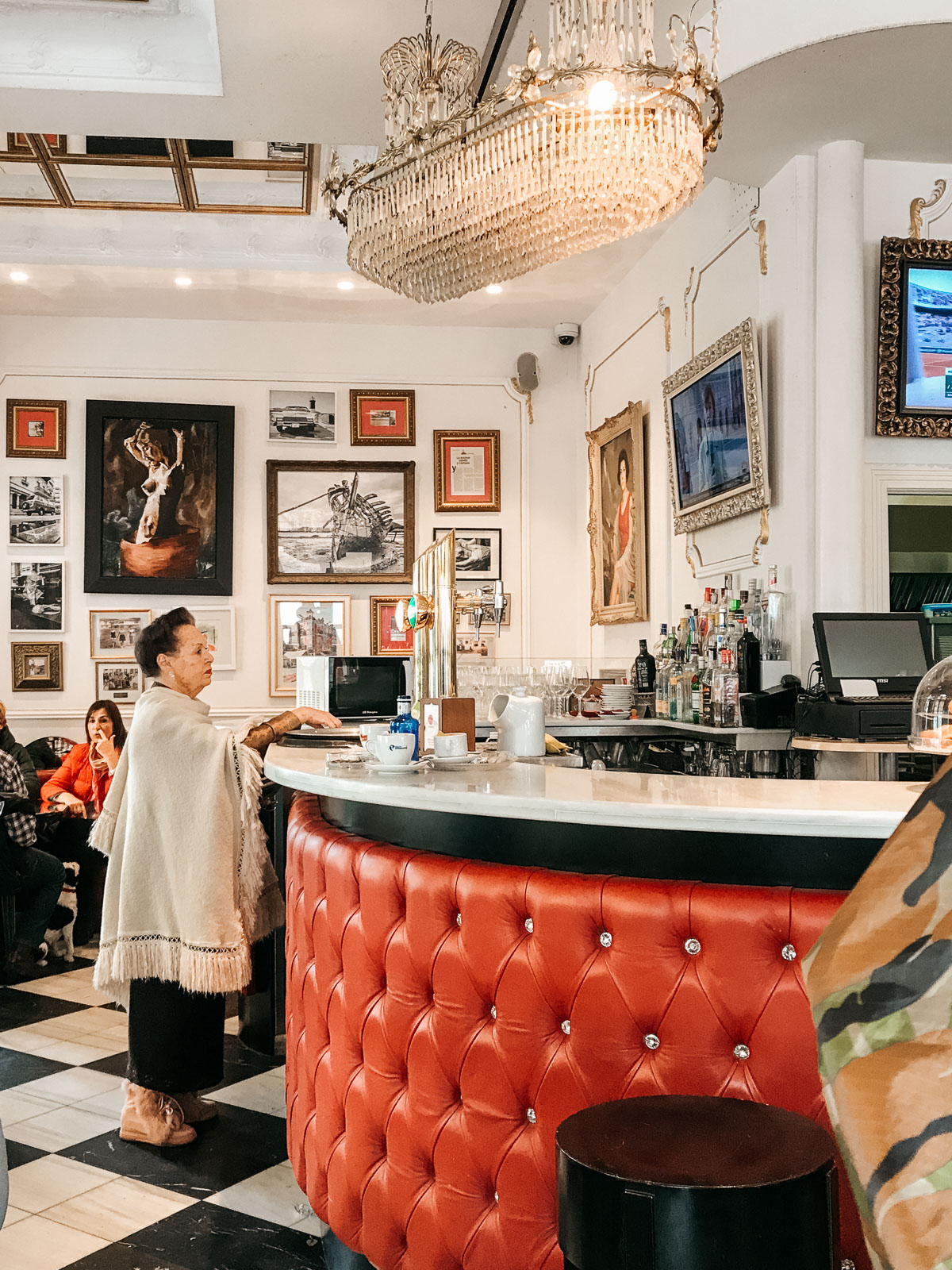 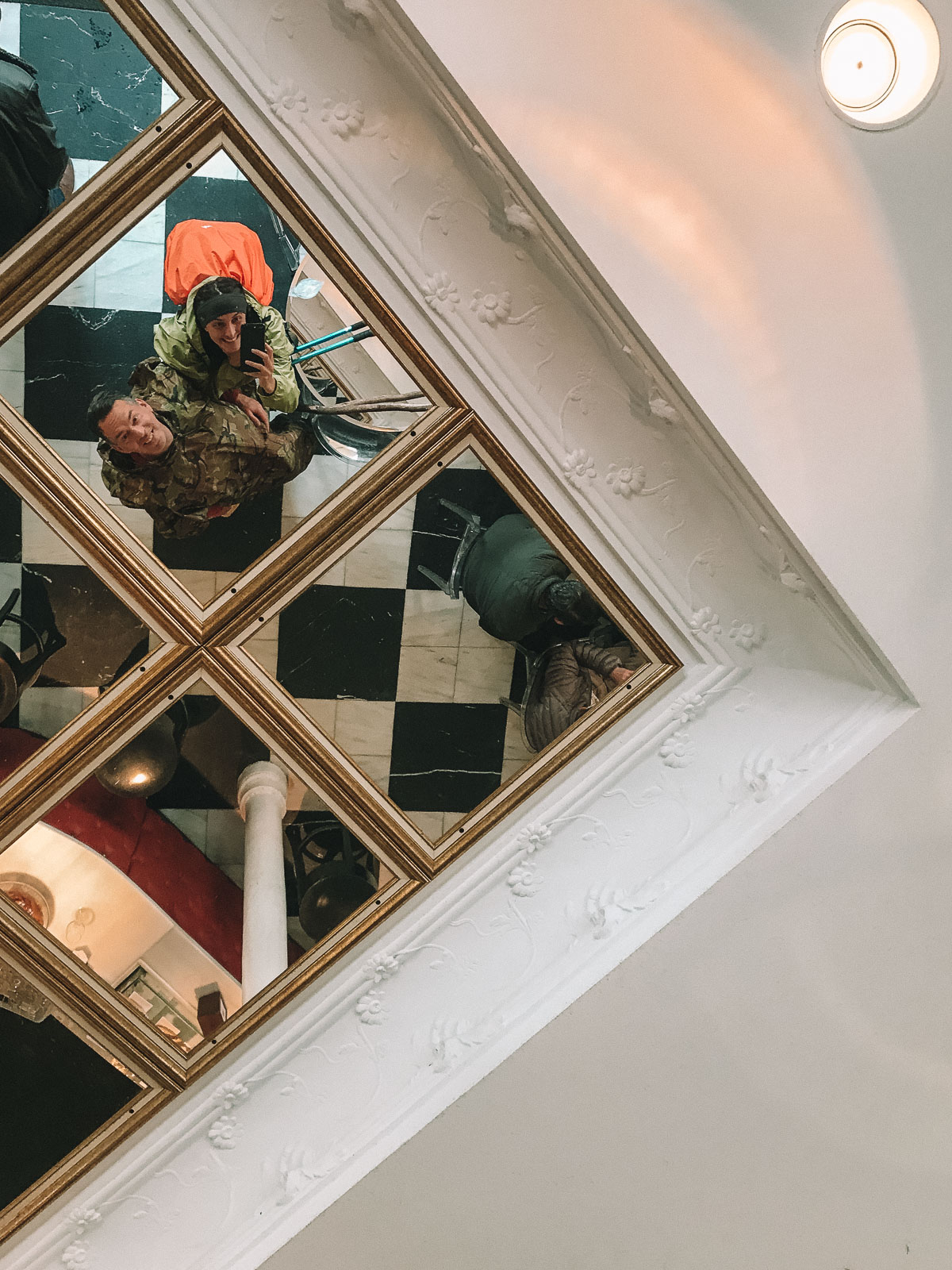 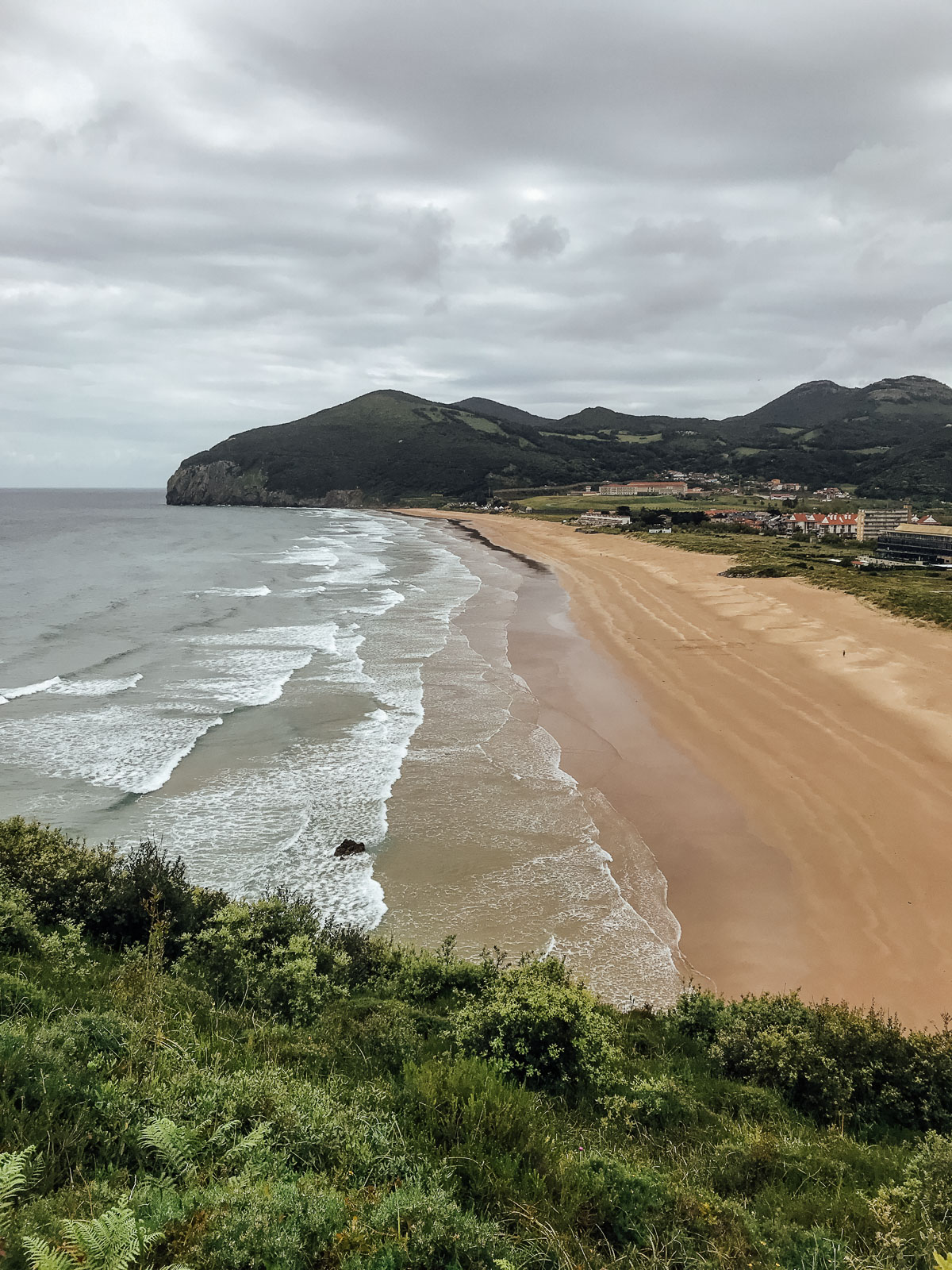 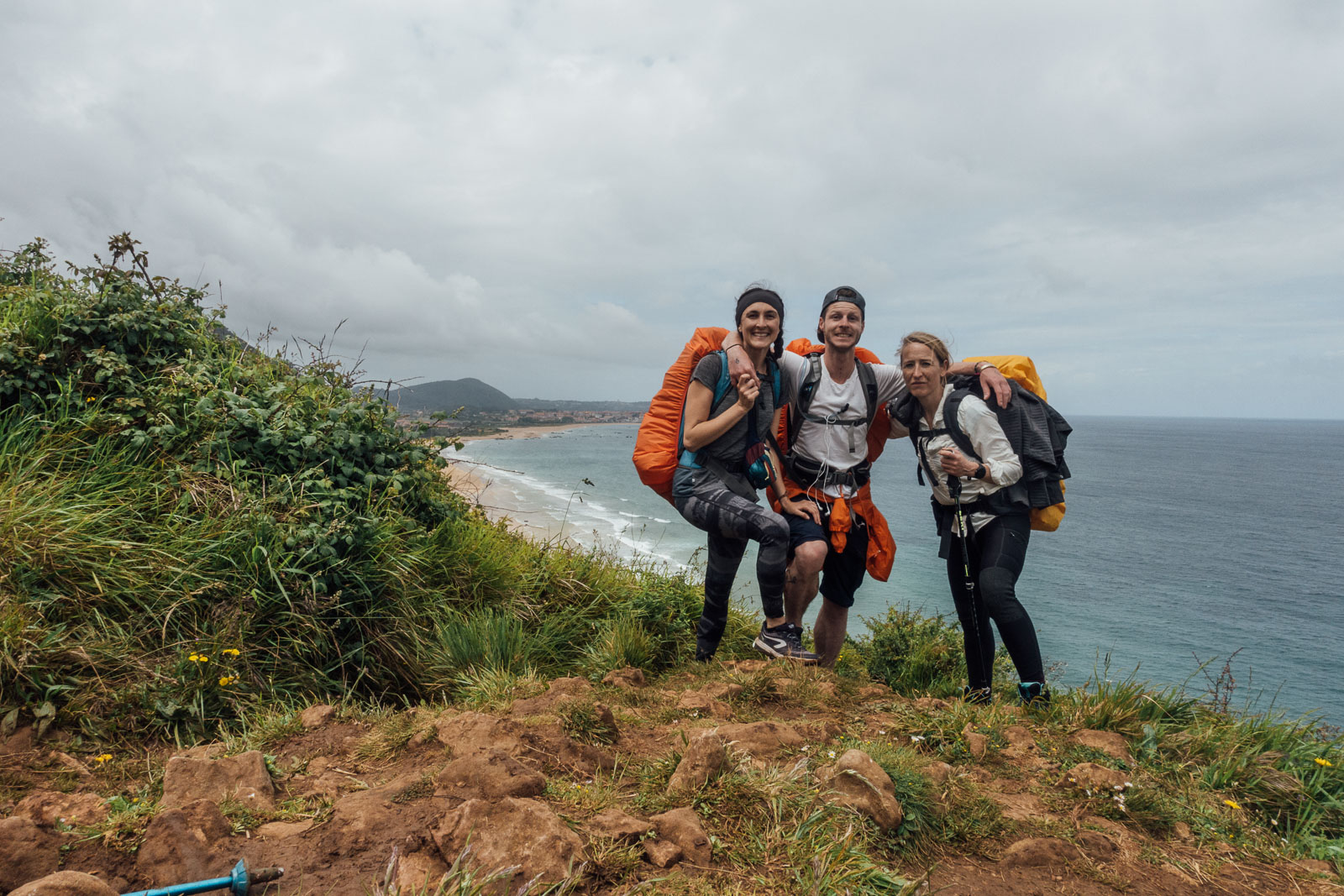 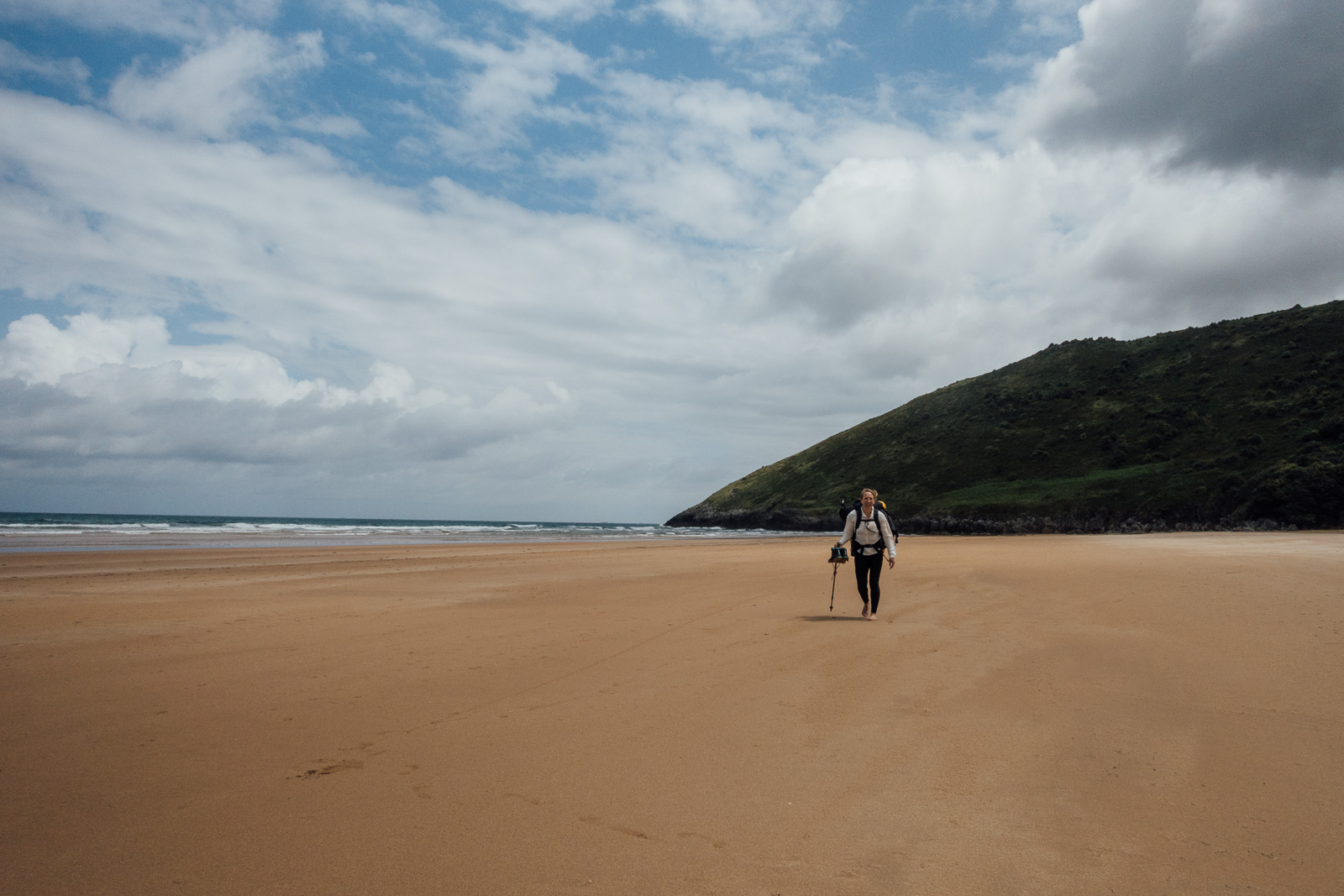 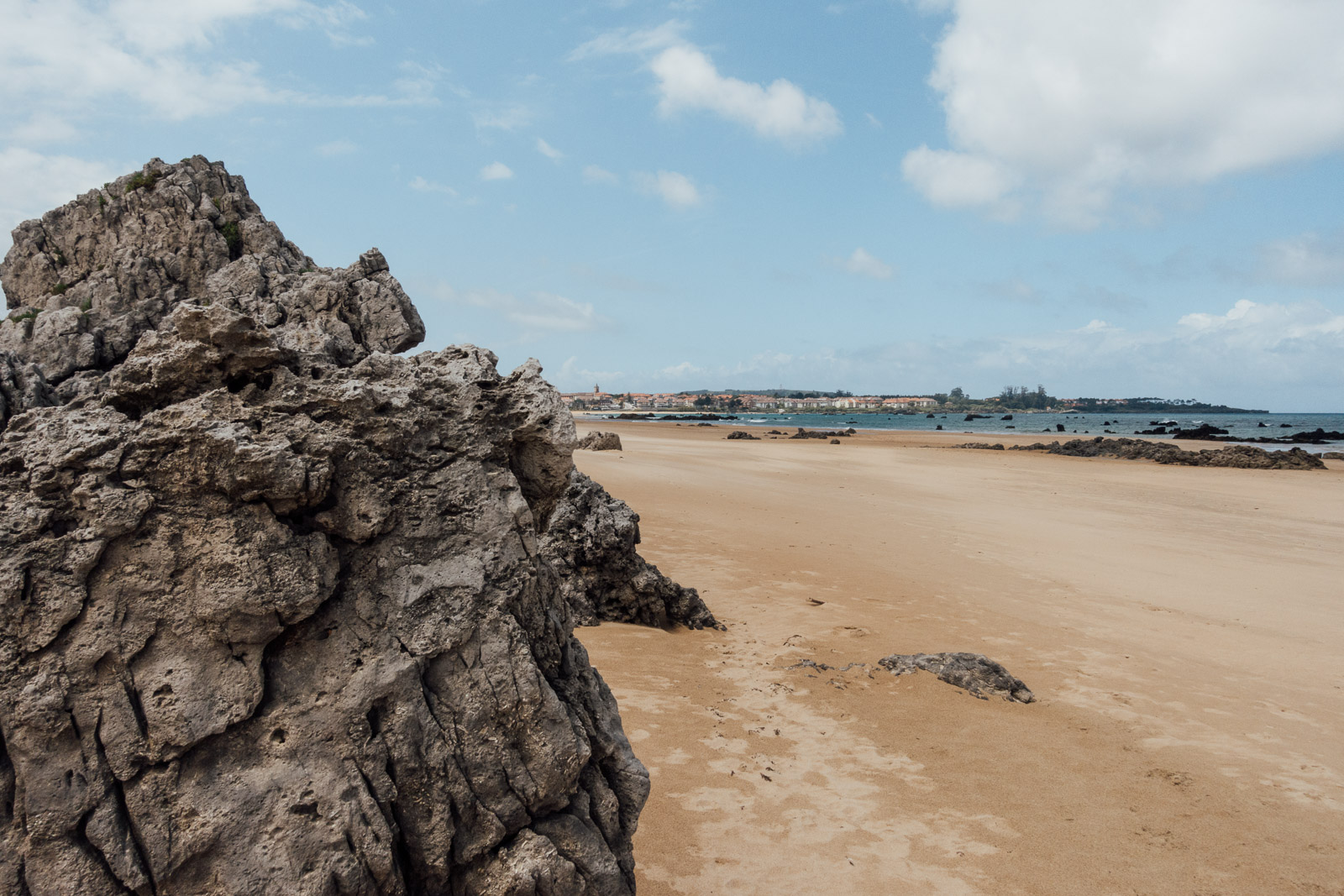 I expected the monastery to have the same warmth as the one outside of Markena, but there was something cold about it. The medieval doors with black bars over slit windows set the tone for the overnight visit. There were no in and out privileges, and instead, we had to wait to be let inside. Protected from what, I couldn’t tell, but there felt a distrust or a disconnect from the natural ebb and flow of Pilgrims arriving at other albergues.

When we entered the reception area, the nun informed us all the main bunk rooms were full, but the additional wing had plenty of beds. There were no signs of Pilgrims except for the collection of muddy shoes, walking sticks, and trekking poles scattered by the door. Caring more about finding a bed than community, she escorted us through a private corridor decorated with religious paintings, tapestries, and sculptures. It felt more like a museum than a church, and I imagined how old the relics were to be. We passed through a dark hallway and through a heavy wooden door to find a hall with vaulted ceilings, a full kitchen, an expansive dining table, and several bunk beds. We were the first to be placed there, which meant first dibs on hot showers.

We slipped out the back door to grab groceries and returned to a few more familiar faces. We ate dinner together at the table and called it an early night.

I didn’t realize Nadine was staying at the monastery until I saw her in the kitchen for breakfast the next morning. To let my feet mend, our two days of rest meant losing pace with the people we had met so far, yet somehow, we unknowingly arrived in the same place as Nadine.

Turns out moving slow and taking rest had its fair share of rewards.

Through the stone window of the kitchen, we heard the rain beat down harder than the light mist of the morning. We decided to settle in for a bit longer to wait out the storm, with no real rush to arrive at the next destination.

Nadine made a new pot of hot water to steep the tea, and we fell into an effortless conversation. I was happy to see Cyrus also staying at the monastery—the man I spoke freely with about death at the overbooked Albergue the same day I met Nadine. We continued our conversation, almost picking up where we left off, this time asking him about being a published author and his intention for after the Camino. I appreciated his openness and vulnerability, allowing me to ask questions I don’t usually have the courage to ask a stranger back home. My fascination with the stories of Pilgrims was growing each day, and I was meeting some rather extraordinary characters.

We overstayed our welcome, and soon the volunteers were sweeping the albergue to kick out the remaining Pilgrims. The required check-out times were usually 8 or 9 am, and for me not being a morning person, I was grateful for the later forced departures. We picked up our conversation and carried it with us on the next steps of the Camino, winding through town, stopping at a mercado for some fresh fruit before reaching the largest stretch of beach so far on the Norte. The sand was perfectly smooth, and we seemed to be the only Pilgrims gracing the shore. Basile and Cryus plowed ahead while me and Nadine took our time. She began to scour for Jacoby shells. Her findings started small, but the further we moved along the beach, the larger the shells became. We got lost in our scouring, turning off our minds but discovering more of each other. Part of me wished to be walking with Basile, but I trusted he was finding his own Camino magic with Cyrus at his side.

At the end of the beach was a small ferry boat meant to transport Pilgrims to Santona. There was a small fee of 2 euros for Pilgrims, but it was exciting to take a new mode of transportation to continue on our way.

Reaching the first cafe of the day, we popped in for some tortillas and cafe con leche before continuing to Isla, where most everyone else was heading. A woman stood at the counter dressed in extravagant pearls and fur. Above us were mirrors on the ceiling, and for a moment, I felt like we were a physical manifestation of Hotel California. Deep down, I knew my heart would be trapped here, forever.

Cryus decided to part ways and continue the Norte on his own. There was something somber about losing people I had just found, but I was learning to embrace the ebbs and flows of connection. Nadine, Basile, and I continued on, unaware of the immense beauty ahead of us.

Given a choice to follow the official path or take a trail into the hills above the beach, we opted for the latter. We huffed and heaved our way over the bluff, climbing elevation quicker than initially intended. Detours are what made me feel alive, the deviation from the well-trodden and true to see what else we could be found in a small act of rebellion. Strange how we were all here doing something unconventional, yet there were so many conventions and norms following the same path as the several thousand Pilgrims before us. I was beginning to understand the true meaning of Camino de la Vida.

When we reached the peak of the bluff, we could see clear straight to Noja with only a single Pilgrim with a red rain cover occupying the beach.

“Wowowowowow,” repeatedly escaped from my lips. We took our time climbing down the slippery trail until finally reaching the endless Playa de Trengandín.

Utterly shocked by how deserted the town was, we decided to book a triple room with Nadine and call Noja home for the night. It was such a treat to have a full bathroom and a private balcony, even if for a few short hours of use. I sighed with immense relief and smiled while Nadine and Basile unpacked their things. I stepped onto the balcony for a moment to myself, realizing I finally understood how Camino families form.

It’s waking up too early despite the rest of the Albergue rushing upstairs to get breakfast. It’s walking into the dining hall after everyone has left to find someone you’ve been meaning to text and not realizing they were sleeping in the room above you the whole time. It’s avoiding stepping out into the rain to begin the journey to the next town and instead talking over stale, cold coffee. It’s making another pot of tea while still waiting for the rain. It’s being the only people on a 3km stretch of untouched beaches with clouds passing rapidly overhead and offering quick glimpses of a blue sky. It’s settling into a cafe with mirrors on the ceiling and half-lit chandeliers for a tortilla and cafe con leche. It’s continuing forward, sharing insights and experiences, and realizing so much connects our lives despite being from different worlds entirely.

It’s reaching another perfectly deserted beach and taking the shortcut over the ridgeline, scrambling over rocks and sloshing in the mud to reach the other side and have your breath escape your lips upon seeing the immense beauty stretching endlessly before you. It’s a three-hour walk collecting shells and making memories and laughing at everything because it’s far too beautiful not to.

It’s sitting in the well-craved sun and deciding to stay rather than carry on further because why would you want to leave such perfect turquoise waters and the pools forming with the falling tide. It’s French cheese and hummus and a fresh baguette with a Spanish bottle of wine, allowing ourselves to open up to eachother a little further. It’s revealing the deeper layers without the fear or judgment of doing so. It’s ending the night far later than you should, knowing the distance ahead of you the next day.

It’s waking up and packing in silence, grateful you get to do it all over again, together, even if it looks slightly different this time.

« Life After Medium: What I Accomplished by Stepping Away 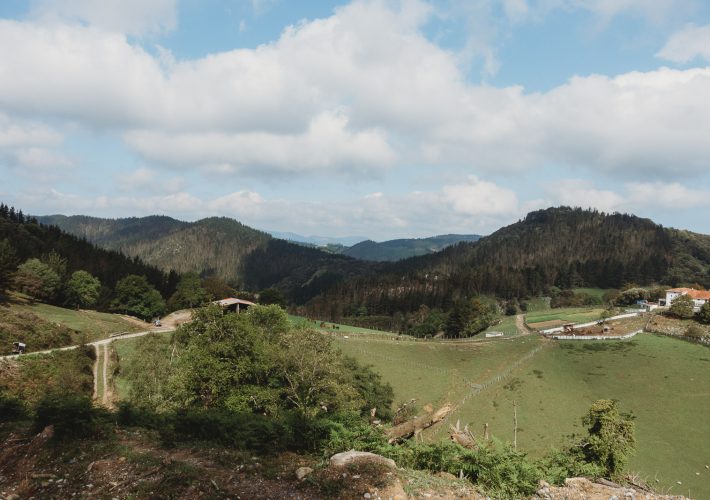 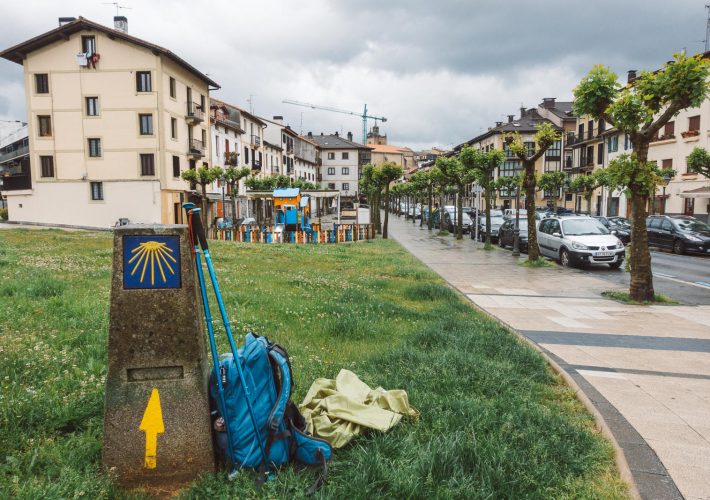