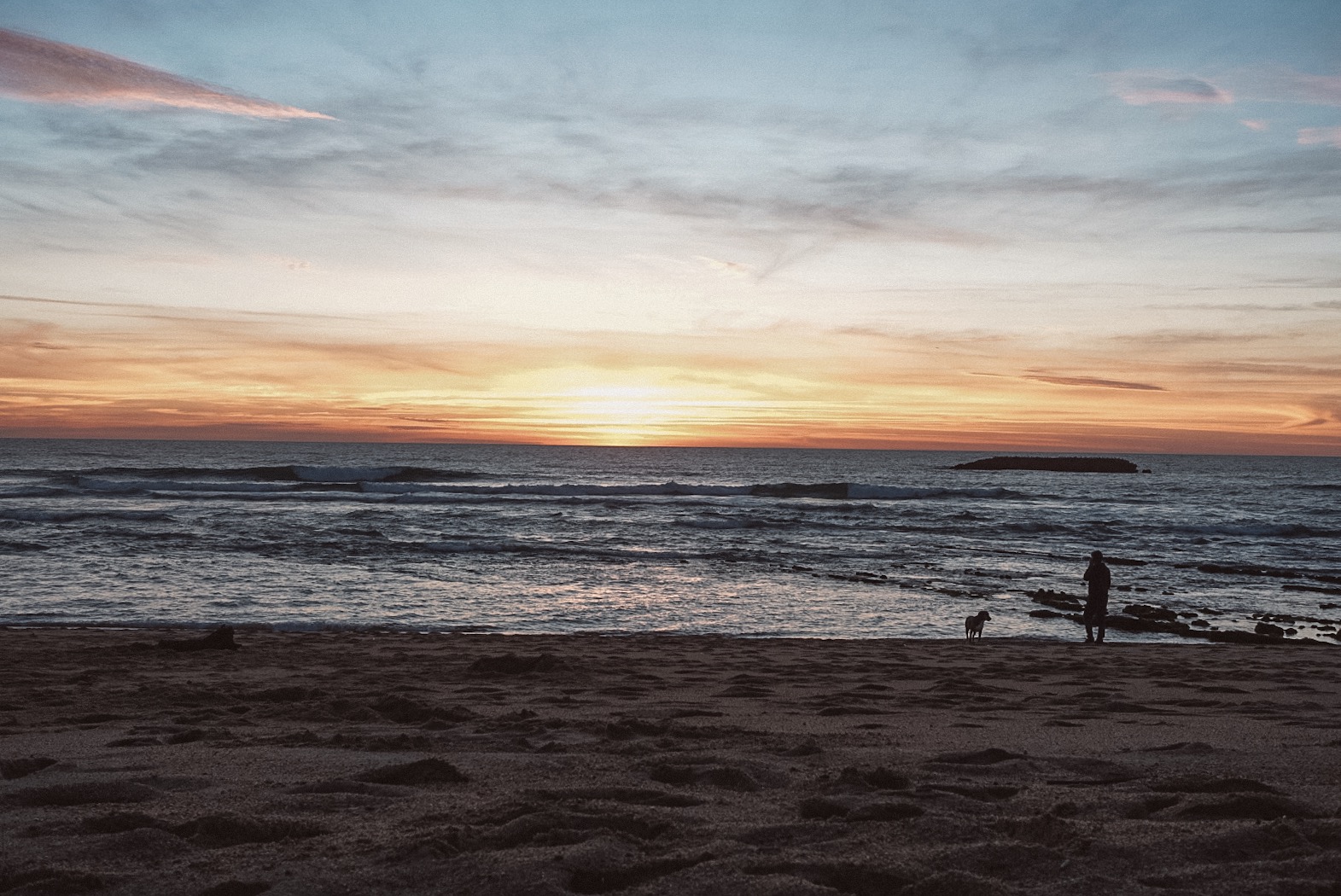 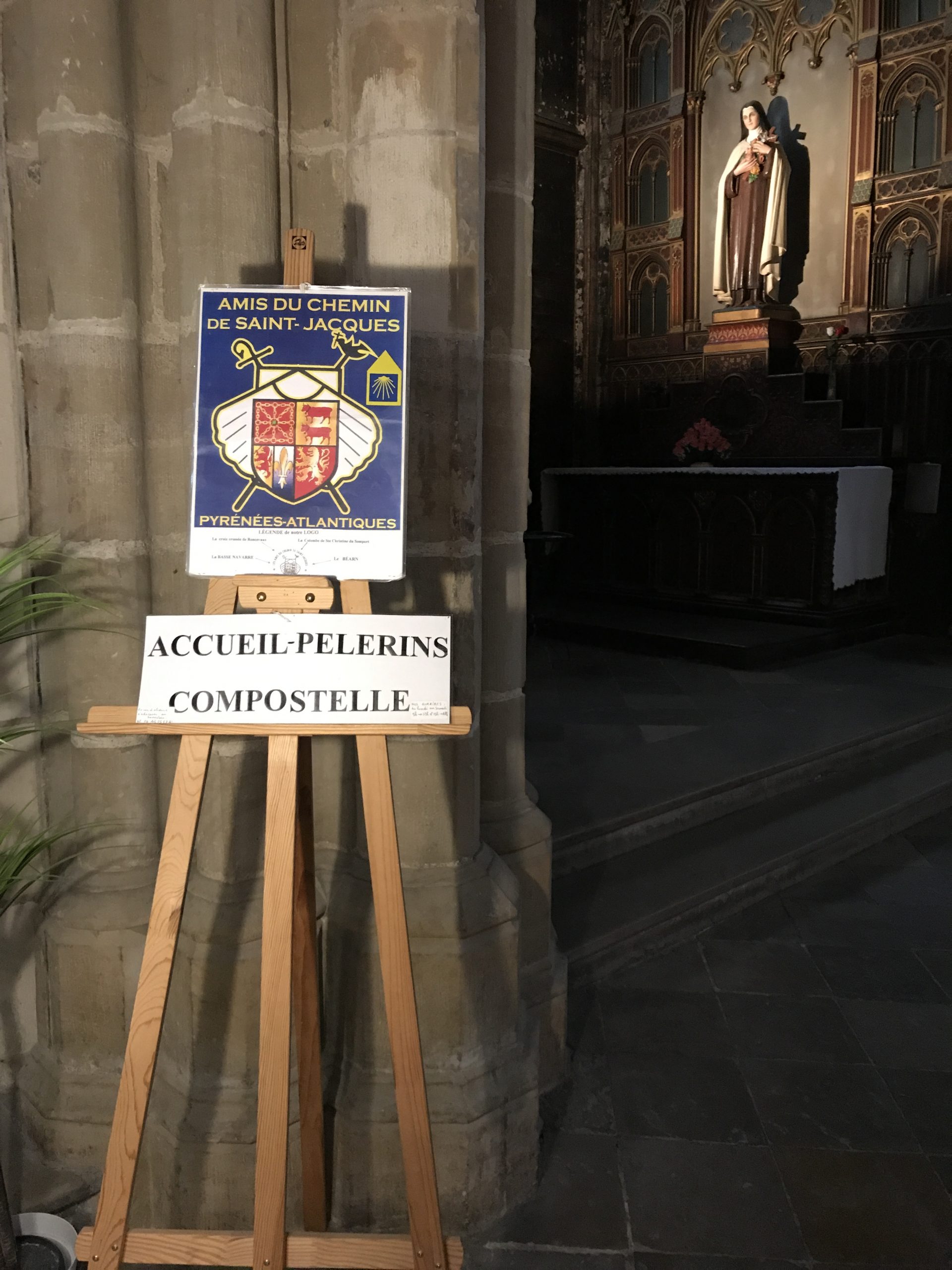 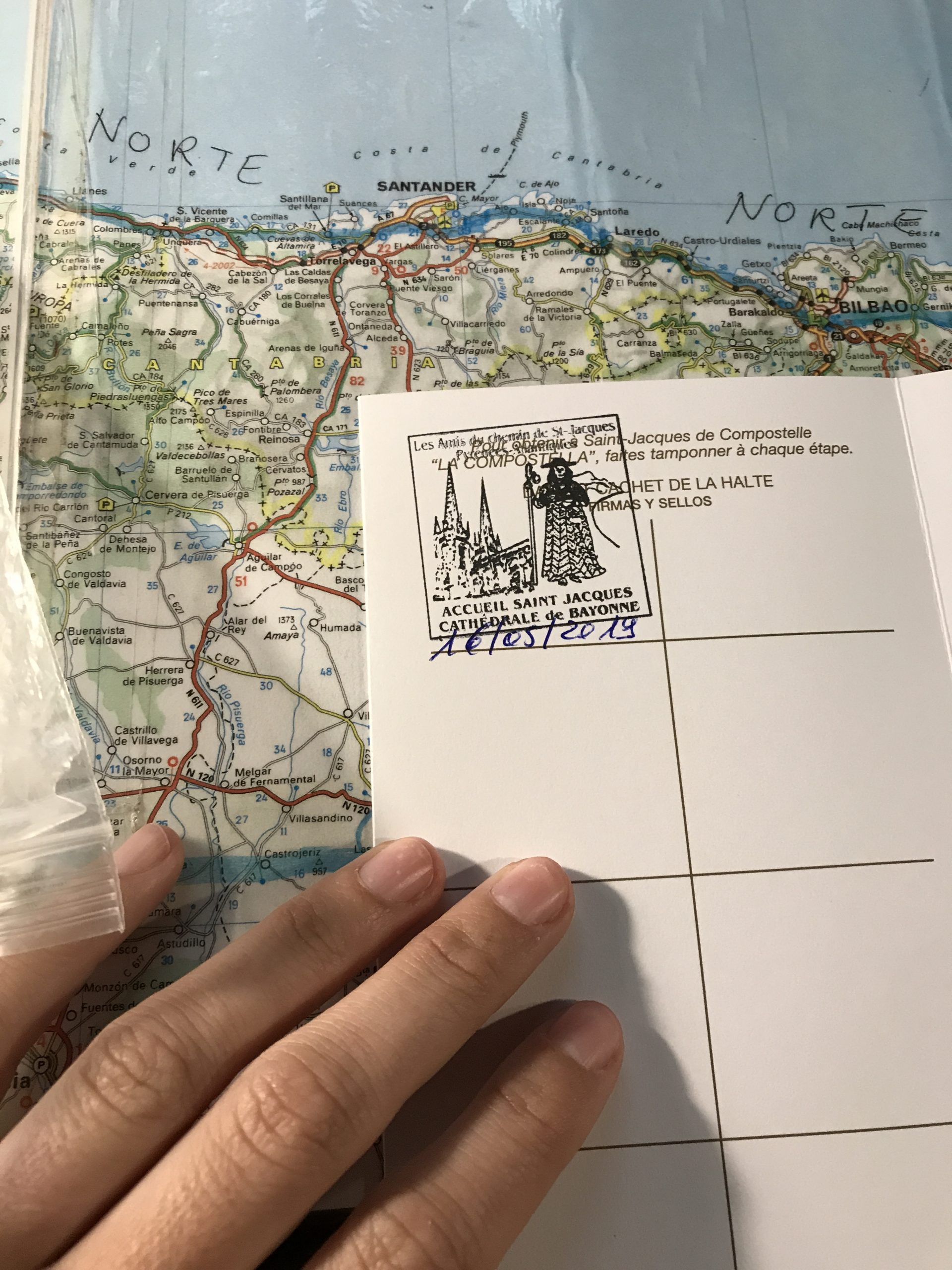 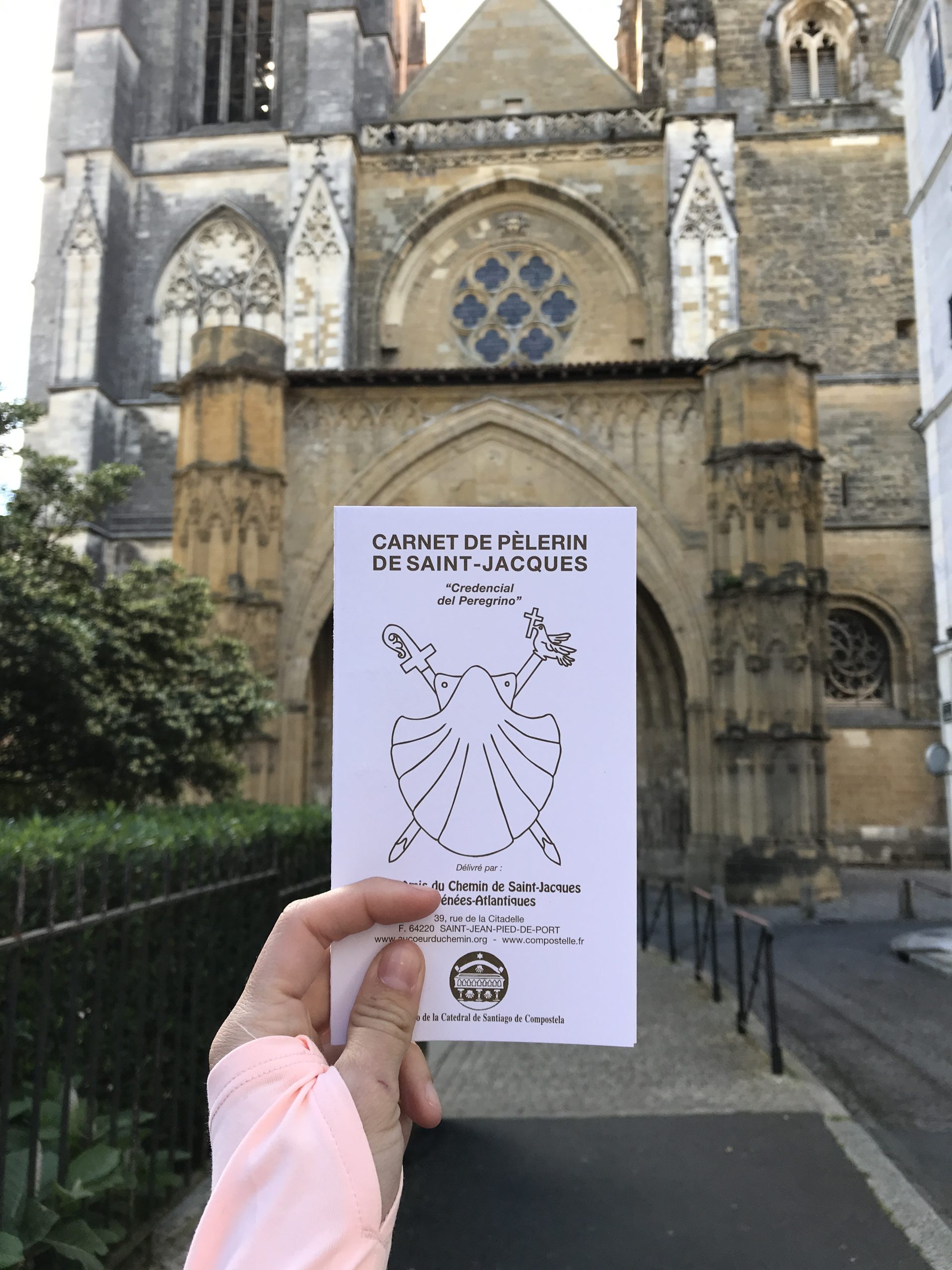 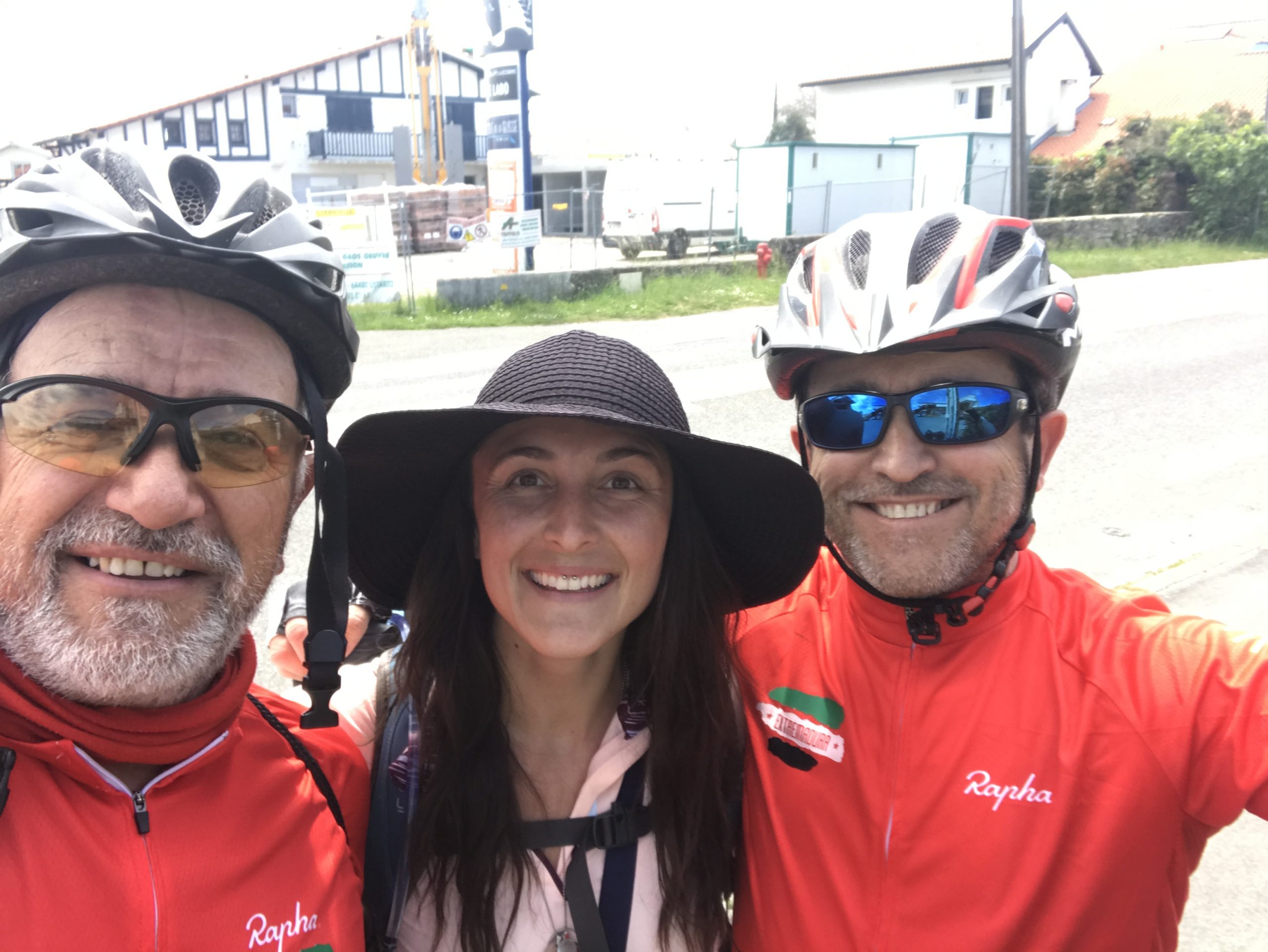 It was recommended to me to get an early start to the many days along the Camino. Partially to beat the mid-day heat and the other reason to find a bed. I opted to take the bus from Biarritz back to Bayonne to collect my Pilgrim Passport, or Credencial del Peregrino, at the Cathedral. Making the transition from France to Spain means a lot to me and I wanted a chance to savor these memories every step of the way.

Walking into the Cathedral almost brought me to my knees. I’m not a religious person, but there’s something serene about entering a holy space where hundreds of people gather to find peace in their journeys. I’ve entered cathedrals in Greece and Spain and Prague and Germany and the feeling is always the same. They don’t particularly bring me closer to God, but they bring me closer to peace and serenity and that’s certainly something.

I didn’t see the desk for Pilgrims right away, but when I finally did, I cried more tears than I expected. The sign was placed under one of the few lights in the space giving it a warm and inviting glow. I took a seat at the table and admired the shells and the pins. A map which highlighted the various routes to Santiago sat on the table in front of me. I traced their jagged rise and fall with my fingers knowing the journey would be long, but rewarding. The volunteer working the desk was an older woman with white hair and a kind smile. She didn’t speak any English, but with the French I’ve picked up the last five weeks, I was able to follow her guidance.

That’s when she issued my first stamp. I’m officially a Pilgrim on the Camino de Santiago.

After I filled out my Credencial, I found an altar to light two candles—one for Jimmy and one for my Aunt Bobbie. These won’t be the last candles I light for them, just as these won’t be the last tears I cry along the Camino. It was the feeling of coming home when the journey is just beginning. My heart knows this is where I’m meant to be and I’ve felt it in every step since leaving the Cathedral this morning.

I’m already seeing the magic of being here in the few encounters I’ve had.

The first was at the Boulangerie on the corner in Bayonne. I was greeted by a balding man in glasses, presumably the owner. As soon as I flashed a smile, he returned one with the same brilliance. With a still sleepy mind, I struggled with my French and he happily switched to English to acknowledge my attempts. Curious about what brought me to his tiny bakery in the shade of the Cathedral, I told him I was beginning the walk to Compostelle. I ordered two pain au chocolat and one croissant for the journey. Before returning to the bus station, he wished me Bon courage. I wore my smile all the way back to my hotel.

Later in the afternoon, two men on bicycles passed me somewhere before Bidart. The gentleman at the front asked how I was doing in Spanish, and I responded quickly before they pedaled further up the hill. I ended up catching them at a boulangerie and we communicated as best as we could through our vague understanding of what the other was saying. 45 days is how long I said it would take to reach Fisterra and they both gleamed at my response. They asked me for a photo and I asked for one too. About ten minutes later, they passed me again on their bicycles. Except for this time they asked for my name.

Raul and Enrique were theirs and I was glad for such kind smiles so early in the journey. 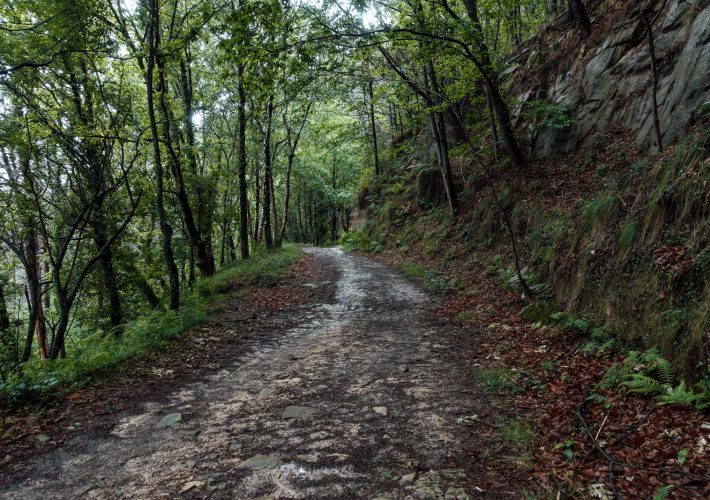